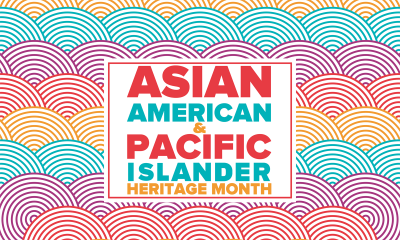 May is a time for celebrating the achievements of Asian American Pacific Islanders (AAPI). Those of AAPI descent account for at least 20 million Americans and includes over 50 ethnic groups from 40 countries. The contributions of AAPI Americans are vast. One notable contribution is the completion of the Transcontinental Railroad spanning across the states, built by Chinese Americans who risked their lives and fought not only physical threats but the pervasive threat of being viewed as “inferior” by their fellow countrymen. After several years, including labor shortages, the Transcontinental Railroad was completed in May 1869.

Asian American Pacific Islanders have also excelled in the literary field. Recently, the National Book Foundation announced their 5 Under 35 Honorees for 2022. These are writers from around the globe, under the age of 35, who have written an impactful debut work of fiction, within the last five years. This year, 4 of the five honorees are of Asian descent!

The National Book Award is one of the most prestigious awards given to aspiring writers. The awards focuses on the best in fiction, non-fiction, poetry, young adult literature, and translated literature. To read the works of this year’s “5 under 35” honorees, as well as other notable AAPI writers, visit the Greenfield Public Library and check out their books from our collection!

If You Leave Me by Crystal Hana Kim

An emotionally riveting debut novel about war, family, and forbidden love, the unforgettable saga of two ill-fated lovers in Korea and the heartbreaking choices they're forced to make in the years surrounding the civil war that still haunts us today. If You Leave Me is a stunning portrait of war and refugee life, a passionate and timeless romance, and a heartrending exploration of one woman's longing for autonomy in a rapidly changing world.

Days of Distraction by Alexandra Chang

"The plan is to leave. As for how, when, to where, and even why--she doesn't know yet. So begins a journey for the twenty-four-year-old narrator of Days of Distraction. As a staff writer at a prestigious tech publication, she reports on the achievements of smug Silicon Valley billionaires and start-up bros while her own request for a raise gets bumped from manager to manager. When her long-time boyfriend, J, decides to move to a quiet upstate New York town for grad school, she sees an excuse to cut and run. Moving is meant to be a grand gesture of her commitment to J and a way to reshape her sense of self. But in the process, she finds herself facing misgivings about her role in an interracial relationship. Captivated by the stories of her ancestors and other Asian Americans in history, she must confront a question at the core of her identity: How do you exist in a society that does not notice or understand you?"--Provided by publisher.

The Book of Form and Emptiness by Ruth Ozeki

"A brilliantly inventive new novel about loss, growing up, and our relationship with things, by the Booker Prize-finalist author of A Tale for the Time Being. After the tragic death his beloved musician father, fourteen-year-old Benny Oh begins to hear voices. The voices belong to the things in his house-a sneaker, a broken Christmas ornament, a piece of wilted lettuce. Although Benny doesn't understand what these things are saying, he can sense their emotional tone; some are pleasant, a gentle hum or coo, but others are snide, angry and full of pain. When his mother, Annabelle, develops a hoarding problem, the voices grow more clamorous. At first, Benny tries to ignore them, but soon the voices follow him outside the house, onto the street and at school, driving him at last to seek refuge in the silence of a large public library, where objects are well-behaved and know to speak in whispers. There, Benny discovers a strange new world, where "things happen." He falls in love with a mesmerizing street artist with a smug pet ferret, who uses the library as her performance space. He meets a homeless philosopher-poet, who encourages him to ask important questions and find his own voice amongst the many. And he meets his very own Book-a talking thing-who narrates Benny's life and teaches him to listen to the things that truly matter. With its blend of sympathetic characters, riveting plot, and vibrant engagement with everything from jazz, to climate change, to our attachment to material possessions, The Book of Form and Emptiness is classic Ruth Ozeki-bold, wise, poignant, playful, humane and heartbreaking"-- Provided by publisher.

"A witty, warm, and irreverent book that traces the lives of two young Taiwanese American women as they navigate friendship, sexuality, identity, and heartbreak over two decades.   Jean Chen Ho's debut collection peels back the layers of female friendship -- the intensity, resentment, and boundless love -- to probe the beating hearts of young women coming to terms with themselves, and each other, in light of the insecurities and shame that holds them back."--Provided by publisher.

"Death at a beauty pageant turns Tita Rosie's Kitchen upside down in the latest entry of this witty and humorous cozy mystery series by Mia P. Manansala, author of Arsenic and Adobo. Things are heating up for Lila Macapagal. Not in her love life, which she insists on keeping nonexistent despite the attention of two very eligible bachelors. Or her professional life, since she can't bring herself to open her new café after the unpleasantness that occurred a few months ago at her aunt's Filipino restaurant, Tita Rosie's Kitchen. No, things are heating up quite literally, since summer, her least favorite season, has just started. To add to her feelings of sticky unease, Lila's little town of Shady Palms has resurrected the Miss Teen Shady Palms Beauty Pageant, which she won many years ago-a fact that serves as a wedge between Lila and her cousin slash rival, Bernadette. But when the head judge of the pageant is murdered and Bernadette becomes the main suspect, the two must put aside their differences and solve the case-because it looks like one of them might be next"-- Provided by publisher.

To Paradise by Hanya Yanagihara

"In an alternate version of 1893 America, New York is part of the Free States, where people may live and love whomever they please (or so it seems). The fragile young scion of a distinguished family resists betrothal to a worthy suitor, drawn to a charming music teacher of no means. In a 1993 Manhattan besieged by the AIDS epidemic, a young Hawaiian man lives with his much older, wealthier partner, hiding his troubled childhood and the fate of his father. And in 2093, in a world riven by plagues and governed by totalitarian rule, a powerful scientist's damaged granddaughter tries to navigate life without him--and solve the mystery of her husband's disappearances. These three sections are joined in an enthralling and ingenious symphony, as recurring notes and themes deepen and enrich one another: A townhouse in Washington Square Park in Greenwich Village; illness, and treatments that come at a terrible cost; wealth and squalor; the weak and the strong; race; the definition of family, and of nationhood; the dangerous righteousness of the powerful, and of revolutionaries; the longing to find a place in an earthly paradise, and the gradual realization that it can't exist. What unites not just the characters, but these Americas, are their reckonings with the qualities that make us human: Fear. Love. Shame. Need. Loneliness''--Dust jacket flap.

The Thousand Crimes of Ming Tsu by Tom Lin

Fighting his way across the West to rescue his wife and exact revenge on the men who destroyed him, while settling old scores along the way, Ming Tsu is aided by a blind clairvoyant and a troupe of magic-show performers, some with supernatural powers.

"Prairie Lotus is a powerful, touching, multilayered book about a girl determined to fit in and realize her dreams: getting an education, becoming a dressmaker in her father's shop, and making at least one friend. Acclaimed, award-winning author Linda Sue Park has placed a young half-Asian girl, Hanna, in a small town in America's heartland, in 1880. Hanna's adjustment to her new surroundings, which primarily means negotiating the townspeople's almost unanimous prejudice against Asians, is at the heart of the story. Narrated by Hanna, the novel has poignant moments yet sparkles with humor, introducing a captivating heroine whose wry, observant voice will resonate with readers. In Dakota Territory in the 1880s, half-Chinese Hanna and her white father face racism and resistance to change as they try to make a home for themselves. Includes author's note."-- Provided by publisher.